Fright Night!
Miss T is dolled up in her new costume to scare everyone at the costume party, scare her before
she scares anyone else!
Rate this post
Explore this article
Introducing Scary Teacher 3DStoryGameplayHow to controlUse hintsCharactersBe wary of Miss TGraphicsMOD APK version of Scary Teacher 3DMOD features Download Scary Teacher 3D MOD APK for Android

Scary Teacher 3D MOD APK (Unlimited Money) is a suitable choice to download if you want to find a fun game in your spare time.

This game was released by Z&K Games, a publisher passionate about horror games. Their games create a sense of drama and suspense for the players. Their latest game, Scary Teacher 3D, has reached more than 10 million downloads on Google Play since its launch, and that number keeps growing every day. With unique, innovative gameplay, simple control mechanisms and stunning 3D graphics, the game quickly captured the hearts of players.

This game is about Miss T, a math teacher at an elementary school. When looking at her appearance, she is just a normal teacher. But in fact, Miss T is a nightmare for students in town. She enjoyed giving physical punishment to torturing children. One day, she moved next to your house. You decide to break into her apartment and find a way to make her mad.

As a child, teasing an adult is a bad thing to do. But that is recommended when you play Scary Teacher 3D. When playing this game, you may remember Granny. Both games require you to break into a scary woman’s apartment. But with Scary Teacher 3D, instead of running away, you will actively search for objects (such as mouse traps) and place them on Miss T.’s table. You will feel satisfied when she screams in anger.

Every morning, Miss T will go out to get a newspaper. It is your chance to sneak into her apartment. Next, you need to quickly find an object and place it under the newspaper on the table. The search can take quite a while because this is a fairly large house with many rooms such as living room, bedroom, music room, bathroom, kitchen, … And when completing your “joke”, hurry and get out of that house before she catches you.

If she’s preparing to eat breakfast, spoil that breakfast by adding lots of salt to the food (or soda, if you want). Miss T intends to relax and watch her favourite show, ruin the TV before she can do this. There are countless jokes for her. Although sometimes I feel the jokes are a bit excessive, it is the price that she has to pay when she often torture children.

If you temporarily have no idea, use the hint. You can find Stars somewhere on Miss T.’s campus. Use it to buy hints of the game.

Like Subway Surfers, the main characters in the game are naughty boys and girls. When playing Scary Teacher 3D, you can unlock many characters and their costumes. Currently, the game has only two main characters, Nick and Tani. Hopefully, in the next updates, the publisher will add some special characters to make your journey more interesting.

Be wary of Miss T

The small screen on the left corner helps you know the location of Miss T in the premises of the house. In my opinion, you should play a few times to remember every detail of this house. That helps you know exactly which room she is in. When she changes her attitude, it means that she has discovered you. Runaway, hurry!

Scary Teacher 3D is a game with some elements of the horror game, but the graphics don’t have signals telling that. The game has bright colors and peaceful background in a small town. Miss T is quite aggressive and scary in appearance, but sometimes, she also has some funny emotions. Besides, the music is also quite funny, helping the game reduce the inherent horror. Due to some violent elements, the game requires you to be 12 years or older.

Unlimited Money: Instead of searching for items in Miss T’s house, you can use items available bought with coins before starting the game. With the money available, you can freely buy items and save a lot of time finding objects. In addition, some advanced items help you create extremely unique and interesting jokes.

Excitement, suspense, startle, fear. It is one of many emotions when you play Scary Teacher 3D. Although there is no color and atmosphere of a horror game, sneaky doing bad things can make you feel a heart attack. Trust me! You will not like the feeling of being caught by Miss T. 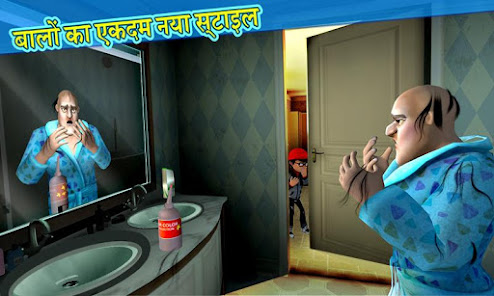 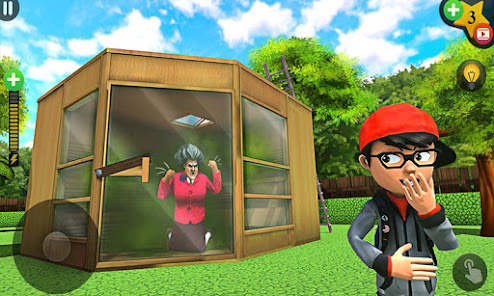 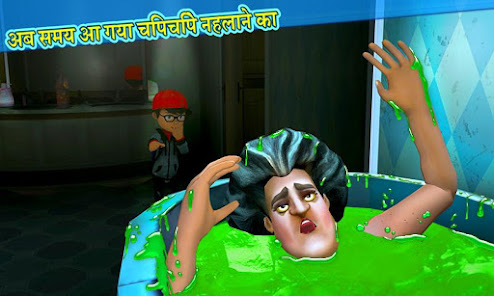 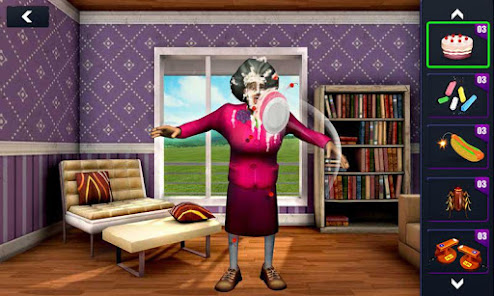 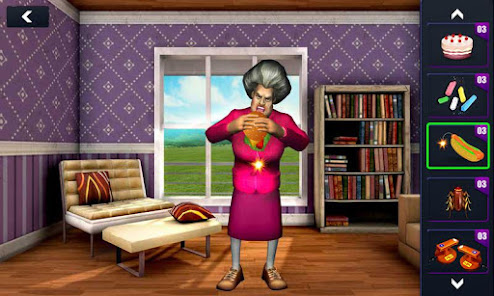 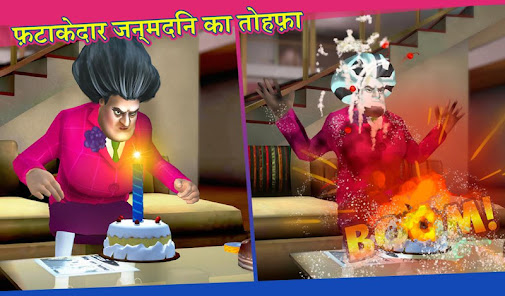 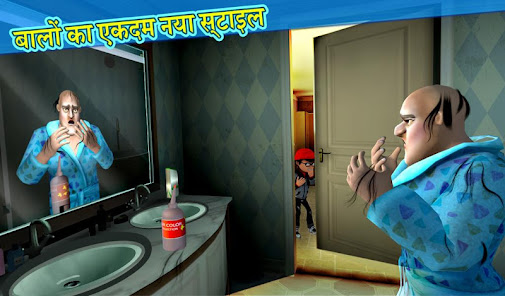 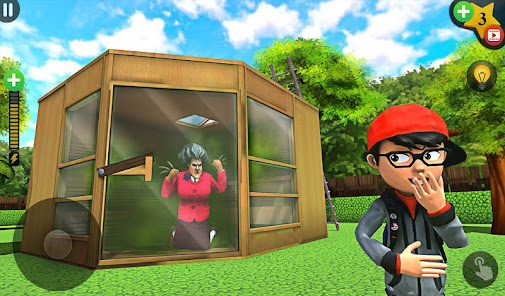 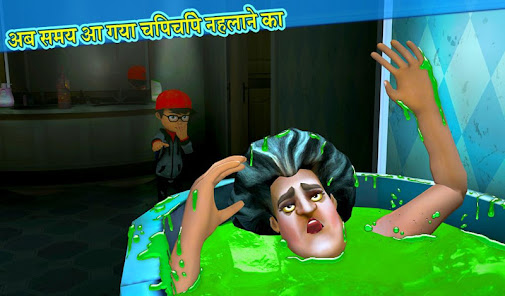 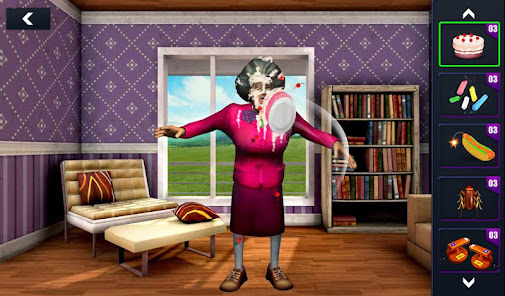